Life in Lockup: An In-depth Look at Reasons for Incarceration in the U.S.

The United States jails more of its citizens than any other country in the world. And the rate of incarceration has surged in recent decades. What’s behind the trend of mass incarceration?

In the Lead (But Not for a Good Reason)

The U.S. outpaces all other nations in incarceration rate — and it’s not even close. But mass incarceration wasn’t always part of the American way of life.

Length of sentence, often as a result of mandatory minimum sentencing, is a primary reason why the U.S. prison population remains high.

Federal sentencing guidelines first adopted in the 1980s were aimed at standardizing punishment for serious crimes across the country. And changes over the years have focused on drug crimes, in particular, including mandatory minimums for crimes related to certain drugs, even if those crimes were nonviolent. (4, 5, 6)

The Anti-Drug Abuse Act establishes mandatory minimum federal sentences. The minimum for selling or possessing crack is 100 times harsher than for powder cocaine. In the following decade, the prison population doubles.

The U.S. Supreme Court rules against a Michigan man in his effort to overturn his life sentence for possessing 1.4 pounds of cocaine.

Inspired by the rape and murder of Polly Klaas, California enacts its “three strikes” law mandating that any offender with three felonies receive minimum sentences of 25 years to life.

Federal law mandates a sentence of life without parole for anyone whose third strike is a federal crime.

The Violent Crime Control and Law Enforcement Act provides federal grants for states that adopt truth-in-sentencing policies, including that individuals convicted of violent crimes serve at least 85% of their sentence.

Nearly two-dozen other states adopt measures similar to that in California.

Drug offenders soon make up 25% of the prison population.

10 times as many third-strikers are serving time for drug possession as for second-degree murder.

The federal sentencing commission recommends making the punishment for crack the same as for powder cocaine; for the first time since the inception of the commission, Congress rejects its recommendation.

The Fair Sentencing Act of 2010 reduces the 100:1 disparity between crack and powder cocaine to 18:1.

The War on Drugs

Since President Ronald Reagan made it a major focus of his domestic policy in the early 1980s, drug crime has helped fill prisons across the country.

Policies that require law enforcement to detain those suspected of being illegal immigrants also are helping the prison population balloon — and adding to the bill for taxpayers.

More and more states and cities are handing control of incarceration to private companies. As a result, incarceration is becoming an ever-growing industry.

Occupancy rate guaranteed by many states, with some even guaranteeing 100% occupancy (12) 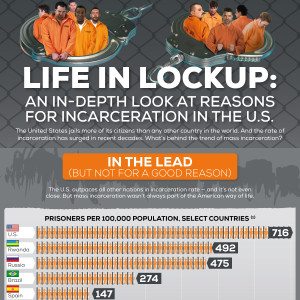