Bloodthirsty — Inside the Mind of a Serial Killer

Serial killers are as fascinating as they are horrifying. As much as we fear them, we can’t help but be captivated and perplexed by their nature. Let’s take a look at some of the most infamous — and chilling — serial killers in history, along with a closer look inside their minds.

Here’s a brief list of some of the deadliest serial killers in history. (1)

Crimes: Convicted of killing and dissolving in acid the bodies of 6 people.

Crimes: Convicted for killing 9 people, but thought to have killed as many as 18.

Sentence: Both received life in prison.

Crimes: While he claimed that he killed more than 100 people, it’s not clear whether that’s true or if he simply wanted to be a famous serial killer.

Sentence: 25 years to life for each murder, served consecutively.

Crimes: Kidnapped, raped and murdered many women, 12 of whom he decapitated.

Sentence: Death by electric chair in 1989.

Also known as: The Co-Ed Killer

Crimes: Killed and dismembered 6 women, then murdered his mother and her friend.

Sentence: Though Kemper asked for the death penalty, he was given life in prison.

Sentence: Bittaker was sentenced to death, but Norris was given 45 years for testifying against Bittaker.

Crimes: Raped and killed more than 300 girls around South America, mainly in Colombia and Peru.

Sentence: Life in prison after a mass grave was found with 53 of his victims’ bodies.

Also known as: The BTK Killer

Also known as: The Night Stalker

Crimes: Robbed, raped, mutilated and murdered many people, from a 9-year-old to a couple in their 60s. He was known for being a Satanist and smearing pentagrams on the walls of his victims’ homes with their blood.

Sentence: Sentenced to death, but died in prison in June 2013.

Also known as: The Milwaukee Cannibal

Also known as: The Butcher of Rostov

Crimes: Raped, murdered and mutilated at least 52 women and children.

Sentence: Executed by firing squad in 1994.

The Psychology of Serial Killers

“I don’t feel guilty for anything. I feel sorry for people who feel guilt.”
Ted Bundy (2)

The nature of psychopathy is still somewhat a mystery to the medical and scientific community: Is it upbringing or nature or a mixture of both that drives these people to do what they do? And are they “fixable”?

Psychopathy and Psychosis: A Closer Look

Psychopaths understand right from wrong. They are unlikely to become psychotic unless they suffer from additional mental illnesses or take powerful drugs.

3%+
Lifetime prevalence of a psychotic disorder (5) 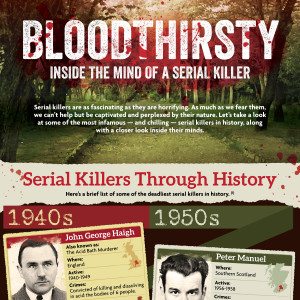