Every year close to 2 million alleged criminals are released pretrial.[2] That’s 3 in 5 felony defendants in the 75 largest counties in the nation.

—Would you trust them?

How do you get them back?

Police:
Juggle many duties
For an unchanging salary

Paid when they nab fugitives.
Often rewarded for the capture of high profile criminals.

Bounty hunters find 97% of all fugitives they pursue.[4][2]
Much more than law enforcement.

Bob Burton, founder of the National Institute of Bail Enforcement, has trained thousands of “bounty hunters”

How It All Works…

Arrested parties can be released on bail
Sample Bail: $100,000

Bail Bondsman offers to pay bond for a non-refundable fee
(whether arrested party is found guilty or not they must pay)
Sample fee: $10,000 (typically 10% of bail amount)

So they hire bounty hunters.

1.Stake out fugitives
2.Interview friends, family, and bystanders
3.Break into their houses
4.And track down the wanted.

Side note: Bond clients sign paperwork allowing bondsmen and bounty hunters to search their house without a warrant.

Bounty hunters have legal power to arrest those who they are searching for.

If they catch fugitives they typically receive 10% of the bond.
–It’s a massive industry, with many regulations:

1700’s: John of the Priests
An ex-horse thief chose to become a “Catholic Priest Hunter” instead of being hanged.
Favorite method: feign deathbed confessions, use concealed weapons
Death: killed by the last priest left in his parish.

1863:Thomas Tate Tobin
This famed adventurer, tracker, trapper, mountain man, and army scout tracked down a trio relatives known to have killed 30 “Anglos” in early Colorado.
Favorite method: Go in alone. Return with heads in a sack. When asked how his trip was, reply “so-so.”
Death: Contributing factors included being hit in the head with a sledge hammer and shot by the son of Kit Carson.

1950: Ralph “Papa” Thorson
This famous bounty hunter is said to have apprehended 12,000 fugitives, the 1980 film The Hunter is based on his life.
Favorite method: Use his non-lethal bean-bag filled buckshot. Consult astrological charts.
Death: Car bomb.

1969: Domino Harvey
This female bounty hunter was from a well-off family and chose to track criminals (particularly drug dealers and thieves) for the thrill.
Favorite method: Pretend to be a lost tourist, get preyed upon and arrest criminals.
Death: Drug Overdose.

In short, Michelle finds things that get lost on purpose.

Instead of brute strength Michelle is a master of digital trails.

When the long arm of the law needs a little help, oftentimes its the keen eyes of a bounty hunter that come to the rescue. 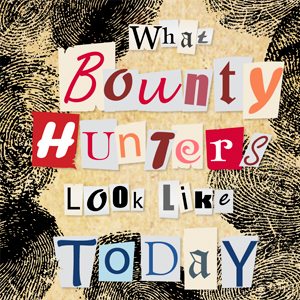