●    The theory:
○    The government has developed a gun that can cause fatal heart attacks
●    What really happened:
○    The CIA developed a secret weapon in the 60’s and 70’s
■    A small poison dart was shot out that would cause a heart attack
●    It could penetrate clothing and leave nothing behind except a tiny red dot on the skin, disintegrating on impact
●    The target would feel as if they’d been bitten by a mosquito
●    The poison denatures quickly so autopsy would not indicate foul play
●    Why we know about it:
○    In 1975, Congress investigated the rogue activities of the CIA
■    United States Senate Select Committee to Study Governmental Operations with Respect to Intelligence Activities
■    During testimony, the secret weapon became known to Congress

●    The theory:
○    The CIA is spying on American journalists and controlling the media
●    What really happened:
○    Operation Mockingbird was a CIA operation that spied on members of the Washington press corps in 1963, 1972 and 1973
■    They also paid journalists to publish CIA propaganda
■    This included wiretapping phones as well as observing their offices to track their activity and visitors
○    Wiretapping of civilians is against CIA code
■    At least one part of Operation Mockingbird was done with coordination from the Attorney General, Secretary of Defense and Director of the Defense Intelligence Agency
○    Kennedy set the precedent for monitoring civilians, but it was also practiced in the Johnson, Nixon, George W. Bush  and Obama administrations
●    Why we know about it:
○    Mockingbird was uncovered by the Church Committee after the Watergate scandal
○    John F. Kennedy secretly recorded Operation Mockingbird conversations in the Oval Office. They are now part of The Presidential Recordings

The theory:
●    The FBI poisoned alcohol during Prohibition
●    What really happened:
○    In 1920, the US passed the 18th Amendment of the Constitution, banning the sale, productions and importation of alcohol
■    The Prohibition Era was marked by widespread bootlegging of alcohol
●    Some of this alcohol, made in private stills, had major health risks from heavy metals in the alcohol
○    Could lead to illness and even blindness
●    Industrial alcohols (used in paints, solvents, fuels and medical supplies) were regularly stolen by bootleggers, redistilled and resold
○    These were regularly stolen by bootleggers, redistilled and resold
○    Law enforcement was frustrated that people continued to consume alcohol
■    The government redesigned formulas used to make industrial alcohol undrinkable
●    The new formulas included adding kerosene, gasoline, benzene, iodine, zinc, mercury salts, nicotine, ether, formaldehyde, chloroform, carbolic acid, quinine and acetone
●    Mandated that up to 10% of total product would be poisonous methyl alcohol
○    The government hoped this method would scare people into giving up drinking
○    Some estimates say that by the time Prohibition was repealed in 1933, the federal poisoning program had killed at least 10,000 people
●    Why we know about it:
○    New York City medical examiner Charles Norris was very outspoken against the poisoning program
■     1926 NYC: 1,200 became sick from poisoned alcohol, 400 died
●    1927: Deaths increased to 700
■    Norris assigned his toxicologist to testing confiscated whiskey for poisons, finding many of the ones we know about today
○    Public health officials and anti-Prohibitionists, including Missouri Senator James Reed,  spoke out against the poisoning program

The theory:
●    People may have gotten a cancer-causing virus from contaminated polio vaccines
What really happened:
●    Simian Virus 40 was first found in monkeys in 1960
○    Monkey kidney cell cultures were used to produce the vaccine
○    The SV40 virus has been linked to many human cancers including childhood leukemia, lung cancer, bone cancer and Non-Hodgkin Lymphoma
■    While SV40 has been found in these cancers, it there is debate as the whether or not the virus actually causes cancer
○    Shortly after it’s discovery, scientists discovered SV40 contaminated some polio vaccines
■    It was reportedly removed from all vaccines in 1963
●    An estimated 10-30 million people may have been exposed to SV40 after receiving polio vaccines in the 1950s and 1960s
○    More than 98 million people received polio vaccines before the contamination was discovered and eliminated
Why we know about it:
●    The CDC admitted to SV40 contamination in polio vaccines
○    In 2013, the CDC abruptly took down its fact sheet on the subject

The theory:
●    The military attempted to develop a bomb that would turn the enemy gay
What really happened:
●    1994 – The U.S. Air Force explored the possibility of using pheromones as a weapon
○    A proposal requested a 6-year, $7.5 million grant to see if dousing enemy combatants with female pheromones would cause a biological reaction in troops
■    The proposal suggested that affected soldiers would find their comrades “sexually irresistible” and could potentially lead to homosexual behavior
■    Presumably, the unbearable attraction would render enemy soldiers less effective in combat
How we know about it:
●    The proposal was discovered by a military spending watchdog group through a Freedom of Information Act request 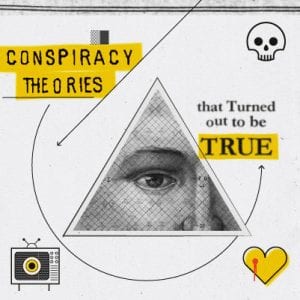