The elderly population in prison is rising at staggering rate. The consequence of mass incarceration and strict sentencing policies at the federal and state level, older prisoners require more expensive care at a time when their danger to society at large is waning. Most are likely to die in prison, as programs designed to release such prisoners on compassionate grounds are rarely invoked, and don’t have much potential to reduce the population of elderly prisoners. Continued high rates of long-term incarceration of the elderly are likely to add billions to state and federal criminal justice budgets.

The Rise of the Elderly Prison Population
Between 2007 and 2010, the number of state and federal prisoners age 65 or older grew 94 times faster than the overall prison population.

Age at 1st incarceration: 50 or older

Why The Elderly Are In Prison
The overall prison population has doubled during the past 20 years from 739980 prisoners in 1990 to 1543206 prisoners in 2010 due to truth-in-sentencing guidelines and “three strikes” laws.

The number of inmates serving life sentences quadrupled between 1984 and 2008; inmates who live a long time with life sentences will grow old and are most likely to die in prison.

The number of inmates sentenced to life without parole more than tripled between 1992 and 2008.

Government Fiscal Impact
Care for aging prisoners is at least twice as expensive than for younger prisoners because this population:

* Needs care outside of the prison system, which represents 72 percent of all healthcare costs spent on aging prisoners

Managing the Problem
By the time a person turns 50, the likelihood of that person committing another crime has dropped precipitously. Only 16.9 percent of prisoners released at age 45 and older return for new sentences.

Policies that could reduce the number of aging prisoners include:

States could save an average of $66,294 every year for each released aging prisoner, which accounts for increased parole, housing and public benefits costs.

Impact of annual cost savings of releasing the average aging prisoner versus keeping them behind bars: 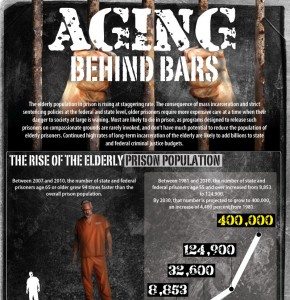