From Mayberry to Martial Law: The Transfer of Military Surplus to Domestic Police

“The means of defense against foreign danger, have been always the instruments of tyranny at home.” – James Madison, the Federalist Papers

As Americans, we’ve always been leery of using the military to police our citizens. But some critics say that the “militarization of law enforcement” is happening right in front of our eyes. Media coverage of the protests in Ferguson, Missouri, after the controversial police killing of teenager Michael Brown, displayed the St. Louis County law enforcement agencies as a well-armed paramilitary force. But if the Founding Fathers were so worried about a threat of domestic tyranny, how did we get here? We took a look to figure it out.

So what does local law enforcement have to do with the United States military?

In 1997, Congress passed the National Defense Authorization Act. Tucked away in that law is the 1033 Program.

The 1033 Program allows the Law Enforcement Support Office to transfer excess Department of Defense property to law enforcement agencies across the United States and its territories.

The Law Enforcement Support Office (LESO) serves as a bridge between the U.S. military and local law enforcement agencies and is overseen by the Pentagon.

The 1033 Program started with the War on Drugs. Congress decided that if law enforcement personnel were waging a drug war, they needed to be outfitted like warriors.

In fact, the LESO slogan is: “Transferring Property from the Warfighter to the Crimefighter”

As well as: “Get with the Program”

How much surplus are we talking about here?

By the end of 2014, the 1033 Program will have transferred over $5 billion worth of military property to the police.

At this rate, 1.5 billion dollars of military surplus will be transferred to domestic police forces in 2014 alone. That’s almost one third (30%) of the entire 17 years worth of transfers… in one year!

[According to the LESO, an original acquisition value “refers to the amount the military services paid for the property.”]

But the police departments only get what they need, right?

According to the Bureau of Justice Statistics, there’s around 18,000 total local law enforcement agencies in the United States.

The ACLU might be on to something: The Department of Defense admits that the LESO records are far from accurate: An Inspector General logistics report took a random sample of equipment transfer records and found that 3 out of 4 (74%) were incorrect. Here’s the breakdown:

This could explain the case of the phantom MRAP

St. Louis County police are not the only ones acquiring MRAPs.

But its not just MRAPs that local law enforcement agencies are picking up from LESO. They can acquire anything from small arms pistols to grenade launchers.

Don’t they need it to fight terrorism here at home though?

Oxford County in rural western Maine received an MRAP through the program along with six other law enforcement agencies across the state. Oxford County Sheriff George Cayer explained that “the western foothills of Maine … currently face a previously unimaginable threat from terrorist activities.”

It seems that $218 million wasn’t enough for Sheriff Cayer and the rest of Maine’s local law enforcement to fight against such “unimaginable” threats of domestic terrorism—that’s the amount of money shelled out by the Department of Homeland Security since the department’s inception in 2002.

In fact, the entire nation has received over $34 billion in federal grants to help local police forces combat terrorist activities.

How can these small towns afford three-quarter-million-dollar armored fighting vehicles?

The price tag is “FREE.”

All this equipment is considered surplus “there is no cost to local taxpayers since they’ve already paid for the equipment with their federal taxes.” The law enforcement agencies that receive it pay for the shipping and maintenance. That’s it!

The Pentagon says that more than 1/3 of everything transferred through the 1033 Program is brand new.

So instead of small towns across the nation paying sticker price, they’re receiving the equipment at a fraction of the cost.

Watertown, Connecticut (population 22,514) recently acquired its own MRAP for shipping and maintenance costs of $2,800. Talk about a fire sale—that’s an unbelievable 99.6% discount!

Isn’t it better to use this equipment instead of destroying it?

Not so, according to four-star Marine General Joseph F. Dunford, Jr.:

In other words, the tax payers could save $40,000 per MRAP by destroying them in the field!

So how can my crimefighters “get with the program”?

Now, getting an armored personnel carrier is a bit tougher—there’s an entire one-page form to fill out. But your police department will need to make some tough choices, including a check box to specify their preference for a vehicle with wheels (like an MRAP) or tracks (like a tank).

Don’t forget, the 1033 Program was started to combat the War on Drugs.

So when they’re filling out the form, your local agency can better its chances of receiving a vehicle by determining if their jurisdiction falls within one of the 28 High Intensity Drug Trafficking Areas determined by the DEA—it’s a zone that includes 2 out of 3 (60%) people in the contiguous U.S. Which means if they didn’t have an excuse to look like a warrior, they do now. Just click the “yes” box.

Once they get with the program, your crimefighters will start receiving weapons of war in no time! 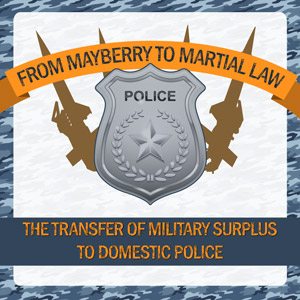