The (really) early days of crime solving:
44 BC – Forensics figured out who killed Julius Caesar: his physician determined that among the 23 wounds suffered, only one was fatal.
1248 AD – Murder by sickle solved. Hsi DuanYu (the Washing Away of Wrongs) by Song Ci was the first record of medical knowledge used to solve criminal cases.
1880 – Fingerprints. Englishmen Henry Faulds and William James Herschel describe the uniqueness of fingerprints.
1887 – Coroners by law determine the causes of sudden, violent and unnatural deaths.
First Sherlock Holmes story published.
1923 – L.A. Law: L.A. has 1st police department crime laboratory in U.S.
1984 – First DNA fingerprinting and profiling techniques developed.
…and then came the Internet

….by sections of the country
Northeast police investigators use social media 89% of the time to help solve crimes.
West: 81%
Midwest: 83%
South: 71%

What Internet Sites Investigators Use

Did you know?
35 %: of data breeches caused by lost laptops and mobile devices

5 million: estimated number of predators who surf the internet
75%: of youths who are solicited by predators don’t tell their parents
75%: of those who met their predators, did it more than once
77% of online predators target kids 14 and over
22% between ages 10-13
One in five kids have been sexually solicited online
9 of 10 parents will never know what happened to their child

Why some police jurisdictions don’t use social media to help them solve crimes:
• 12% say it’s their agency policy
• 17% say they don’t have the time to use this technique
• 37% say they can’t access during working hours
• 33% say they don’t have sufficient knowledge to use
• 4% don’t think the information is useful 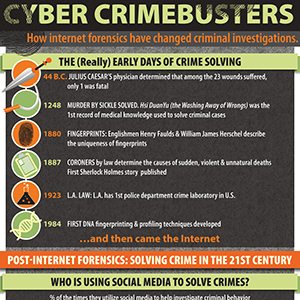