Victims Have Rights Too

There are core rights that are reserved for the victims of crimes:

The right of reasonable protection from the accused
This may go as far as:
■ Police escorts
■ Relocation programs
■ Protection orders

The right to be informed
Most states require that victims be notified of:
■ Arrest and arraignment of offender
■ Bail proceedings
■ Dismissal of charges
■ Plea negotiations
■ Trial
■ Sentencing
■ Appeals
■ Probation and parole hearings
■ Release or escape of the offender

The right to be reasonably heard
○ Victims may speak at any public proceeding, parole hearing, plea or sentencing

The right to reasonably confer with prosecuting attorneys

The right to a speedy trial

Crime Victims May Be Eligible for Government Compensation

If applicable, the program will generally pay for:
■ Medical and dental expenses
■ Counseling costs
■ Funeral or burial expenses
■ Lost wages or support
■ **There are limitations to the program, such as how much money can be spent on a funeral

What to Do if You are the Victim of a Crime

VINE – Victim Information and Notification Everyday
● The first victim notification program, it was implemented in 1996
● Started in Louisville, KY after the murder of Mary Byron
○ Byron’s ex-boyfriend, Donavon Harris, was released from jail after being charged with raping Byron
○ Harris waited outside of Byron’s workplace and, when she got into her car, shot her six times at point-blank range
○ Mary Byron was never informed of Harris’s release
● Today, the VINE system is being used in 47 states
○ 9 million VINE notifications were sent in 2012

VNS – Victim Notification System
● Launched in 2001
● Cooperative effort between FBI, US Postal Inspection Service, the US Attorney’s Office and the Federal Bureau of Prisons

Civil court allows victims of crimes to sue for compensatory or punitive damages for other impacts of the crime, such as emotional trauma, defamation of character, or a number of other issues

If the offender was found guilty in criminal proceedings, it greatly increases the chance that he will be held accountable for restitution in civil court

Seek Help:
Being the victim of a crime, violent or nonviolent, can lead to physical, financial and emotional damage 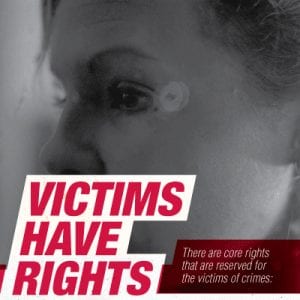