The last two years have challenged the arguments of those on both sides of the gun control debate. With horrific and numerous school shootings, and cities such as Chicago, where 10 gun deaths in any given weekend are common, both sides agree that something must be done about gun violence. However, as the country approaches 50% in favor of stricter gun control, a majority of the nation is still skeptical about the efficacy of gun control.

Before taking a look at both sides of the gun control debate, let’s look at the basic facts on guns in America. 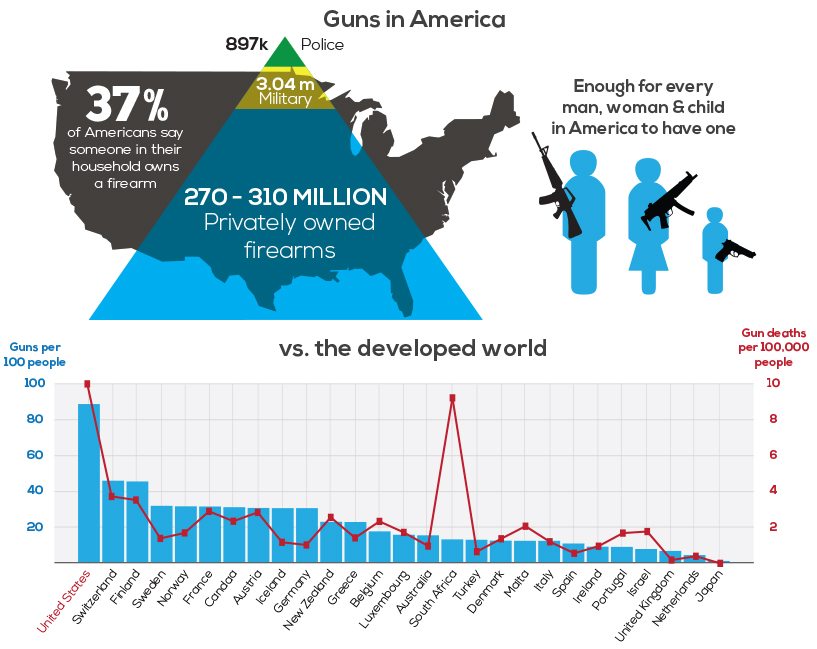 For better or worse, America has the most guns in the world — and unsurprisingly, the most gun deaths in the world. However, violent crimes in general occur at similar rates throughout much of the developed world. Whether the solution to gun deaths is the ability to bear arms, or stricter gun control measures, let’s take a look at the sides of the argument.

To the chagrin and deep disagreement of second amendment originalists, a team of researchers at the Harvard Injury Control Research Center have recently demonstrated, in a review of all relevant literature, that more guns equal more gun deaths. This trend holds true when comparing the US to 26 other developed countries, of which the US has, on average, a murder rate roughly 15 timer higher. This relationship also holds true across states within the US, with states that have more guns, having more gun homicides, even when controlled for poverty, urbanization, age and gender.
[Tweet “America has the most guns in the world — and unsurprisingly, the most gun deaths in the world.”]

While the vast number of privately-owned guns in the U.S. would be virtually impossible to collect, or keep track of entirely, cutting down on the availability of future guns, and offering incentives such as gun buyback programs, or public gun lockers has proven a good way to lower gun crime throughout most of the developed world. Unlike the U.S., in which legislative responses to mass shootings have been relatively mild, or non-existent, countries like Japan, Canada, and Britain are success stories for responding to mass shootings with regulations on who can own a gun, restrictions on shotguns and semi-automatic weapons, and incentives to turn in guns.

David Hemenway, a social scientist at Harvard looks at figures citing the number of times guns were used in self-defense in the United States, and believes they are a pure fantasy. Hemenway notes that cases that are cited as incidents of self-defense usually involve an escalating quarrel between two parties that know one another. In short, the self-defendant plays some role in the escalation of the conflict, and thus is not acting completely in self-defense. In an interview with Harvard Magazine he notes that the number of instances you might use a gun in self defense ranges from “zero to once in a lifetime.” Hardly a compelling reason to have millions of guns on the streets, and available to most people who want them.

Even if David Hemenway’s numbers above are correct and the average gun owner really does only have zero to one chance to use a gun in self-defense in their life, it appears that just knowing someone could have a gun deters a great deal of crime. Take the U.K., where it is nearly impossible to own a gun, as an example.

While the UK has a lower rate of gun crimes per capita than the U.S., the percentage of UK crimes involving guns has increased since gun control laws have been ratcheted up. In short, criminals are more likely to use guns in crimes, knowing they can intimidate innocents who in all likelihood don’t have guns.
[Tweet “It appears that just knowing someone could have a gun deters a great deal of crime.”]

On top of a large percentage of crimes involving firearms, the amount of violent crimes other than firearm crimes has increased since the weapons ban. When firearms became harder to obtain, people acted violently with whatever else they could find: bats, knives, clubs. Also, for those who really don’t care about the law, now crimes can be committed knowing that victims won’t be armed. If guns are outlawed, only outlaws will have guns; and that’s a dangerous combination.