The Alarming Patterns of Hate Crime in America

As defined by the Hate Crimes Statistics Act, hate crimes are “crimes that manifest evidence of prejudice based on race, gender and gender identity, religion, disability, sexual orientation, or ethnicity.”

When we look at the total number of hate crimes, things get complicated quickly.

The difference? FBI data is aggregated from voluntary law enforcement agencies, whereas NCVS and BJS data are based on surveyed victims.

But among states with the highest rate of active hate groups are:

States with the most hate groups are:

The most represented hate groups are:

But hate groups’ collective crimes might be on the decline. Instead, we’re experiencing the rise of the lone wolf.

As the Southern Poverty Law Center reports, “Authorities have had far more success penetrating plots concocted by several people than individuals who act on their own…the lone wolf’s chief asset is the fact that no one else knows of his plans for violence and they are therefore exceedingly difficult to disrupt.”

Police aren’t the only ones under-reporting. The percent of hate crime victims who don’t report to police is also on the rise:

Among the most popular reasons:

But perhaps the most telling fact is this: hate crime rates have remained steady over time, or at least since the HCSA was passed in 1990, which for the first time required governments to record hate crime numbers. Unfortunately, the problem may be changing, but it’s not going away. 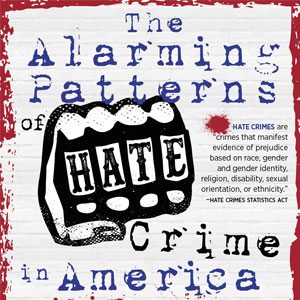