The shooting death of a young woman in San Francisco has placed a spotlight on the practice of sanctuary cities. What are sanctuary cities, and how do such practices impact criminal justice professionals?

What Is a Sanctuary City?

While the numbers are hard to pin down, we do know the definition of a sanctuary city, which is a municipality where law enforcement is prohibited (either by rule or by custom) from inquiring about the immigration status of a criminal suspect and/or has a set of guidelines under which they will notify federal immigration officials before a suspect’s release. Usually those guidelines are based on the person’s previous offenses (if any).

The complete list of these locations depends on which side of the issue you believe, but at least 200 states and cities can be called sanctuary cities to some degree. (1)

States, counties and municipalities with sanctuary-type laws, by source of information (2)

Los Angeles becomes the first known sanctuary city in the U.S., when then-Police Chief Daryl Gates enacts Special Order 40, which reads “Officers shall not initiate police action with the objective of discovering the alien status of a person. Officers shall not arrest nor book persons for violation of Title 8, Section 1325 of the United States Immigration Code (Illegal Entry).” (3)

Lawmakers have at various points over the years tried to curb the prevalence of sanctuary cities by expressly forbidding the practice, but such efforts have failed on the federal level.

However, multiple states, including Georgia, Tennessee and Texas, have considered such measures. (4, 5, 6)

The death of a woman in San Francisco, a sanctuary city, has spurred renewed outrage over such policies.

32-year-old Kathryn Steinle died July 1 after being struck in the chest by a stray bullet while walking along a busy street. Mexican native Francisco Sanchez has been charged with murder in Steinle’s death, and officials reported Sanchez had been deported several times already before the shooting.

Sanchez was released by authorities in April after marijuana charges against him were dropped. (7)

Republican presidential candidate Donald Trump gained in GOP polls after his claim that Mexican immigrants are criminals. Is such an assertion backed by facts? As with most things political, that depends on your perspective.

Estimated number of undocumented immigrants in the U.S. (8)

Percentage of federal murder convictions in 2013 against undocumented immigrants (8)

Sure, that seems like a lot; but that represents only 8 cases total, since the vast majority of murder cases are handled at the state level.

Number of illegal immigrants in U.S. by year (8)

Sanctuary Cities and the Justice System

As we’ve seen, the effect of illegal immigration on the crime rate is far from a clear picture.

So how do sanctuary cities and immigration affect criminal justice professionals? While some would argue such policies simply turn immigration enforcement over to the federal government, others say sanctuary cities make us less safe, as evidenced by the San Francisco shooting.

Whatever your belief, criminal justice professionals, such as local police and sheriff’s deputies, prosecutors, attorneys, immigration agents and judges, are the ones often dealing with the repercussions of federal, state and local immigration policy.

Here are a few of the effects: 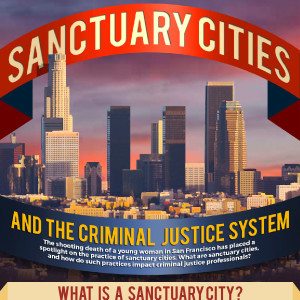