Homicide Trends in the United States

Unlike most comparable Western countries, the United States’ homicide rates actually rose for much of the 20th century. Between 1900 and the heart of the Great Depression, rates soared.

Between 1900-1910, murder rates multiplied sixfold, accompanied by a surge in immigration. By 1933, at the height of the Great Depression and tail-end of Prohibition, murder rates were almost 10 times higher than in 1900.

Thankfully, with the onset of World War II, those rates plummeted. And by the halcyon, “Leave It to Beaver” 50s, the ship of state had steadied its course.

Unfortunately, the relative stability of the Eisenhower years couldn’t last, and the 60s turned everything on its head.

The first half of the decade remained relatively tame – this was still Sullivan-era Beatles, after all — but by 1967, in the midst of the so-called “Summer of Love,” the country endured its highest murder rate in twenty years. Come 1968 – the year of the MLK and RFK assassinations, Days of Rage riots in Chicago, and widespread civic unrest – the country’s homicide rate began to soar out of control.

The paranoid, Manson-plagued 70s devoured whatever hippie dream remained, leaving a veritable wasteland in its wake: the decade suffered some of the highest recorded homicide rates in the United States since colonial New England.

The 1980s continued the slog. A decade of cultural wars, growing income disparity, the burgeoning crack epidemic, and Wall Street excesses saw a peak spike in 1980, followed by a shallow dip and continued steady high rates.

Finally, toward the latter half of the 90s, a sharp downtrend provided some reprieve. Total numbers dropped as well.

So Is This Trend Sustainable?

“The real puzzle in my opinion…is not why crime fell in the 1990s, but why it did not start falling sooner.”

And in 2011’s The Better Angels of our Nature, renowned Harvard psychologist Steven Pinker wrote that:

“Believe it or not, today we may be living in the most peaceable era in our species’ existence.”

“In most of the world, the rate of homicide has been sinking. The Great American Crime Decline of the 1990s, which flattened out at the start of the new century, resumed in 2006, and, defying the conventional wisdom that hard times lead to violence, proceeded right through the recession of 2008 and up to the present.”

Still, many critics are skeptical of such optimism, and major concerns remain.

Of current homicide victims, one profile stands out far above the rest: young, black, and male.

As the data shows, blacks are more than six times as likely than whites to be homicide victims. Moreover, males represent 77% of homicide victims, and a third (34%) of total victims are under 25-years-old.

A further potential cause for concern is the recent surge in homicide rates in major American cities for the first half of 2015:

Many are quick to stress how myopic and unreliable such numbers are, but they exist nonetheless. And following the recent crises in Ferguson, Baltimore, New York, and elsewhere around the country, it’s unclear if the United States is heading toward a period of social unrest similar to the 1960s when homicide rates first reignited.

So what can we learn from such a survey? The endless debates will continue. But at least this can be said: like many trends, homicide numbers are fickle, vacillating, frustratingly opaque, and deeply – perhaps fundamentally – tied to their particular historical moment. 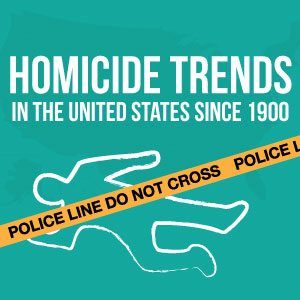