The U.S. Police State: How The United States Has Become Its Own Worst Nightmare

Of all the alarming statistics, stories, and, increasingly, videos that indicate a rising tide of police brutality – or, as the government more euphemistically terms it, “excessive force” – the above numbers should be the most concerning for every citizen of the United States. Not simply because of the astronomical disproportion at hand, but because of the object of that disproportion. To whom do we compare with so unfavorably?

That’s right. The very tyrannical entity from which we originally escaped, then rebelled. We’ve become our own worst nightmare.

Why did we rebel? State overreach that included an invasive, aggressive, and overly hostile standing militia – then the equivalent a police force. No wonder the Bill of Rights is so preoccupied with the subject…

“A well regulated Militia, being necessary to the security of a free State, the right of the people to keep and bear Arms, shall not be infringed.”

“No soldier shall, in time of peace, be quartered in any house without the consent of the owner, nor in time of war, but in a manner to be prescribed by law.”

“The right of the people to be secure in their persons, houses, papers, and effects, against unreasonable searches and seizures, shall not be violated, and no Warrants shall issue, but upon probable cause, supported by Oath or affirmation, and particularly describing the place to be searched, and the persons or things to be seized.”

Today, we focus on the “keep and bear arms” clause, but, for the Founding Fathers, the “well regulated militia” was arguably the more important and hotly contested point. Recalling the daily abuses of British soldiers throughout the colonies, many key figures debated whether a standing army should exist at all.

With routine aggressive home entries by militarized agencies like SWAT, often on meager legal grounds, the 3rd and 4th amendments are under fire as well. As Radley Balko, author of Rise of the Warrior Cop claims:

“The founders and their contemporaries would probably have seen even the early-19th-century police forces as a standing army, and a particularly odious one at that. Just before the American Revolution, it wasn’t the stationing of British troops in the colonies that irked patriots in Boston and Virginia; it was England’s decision to use the troops for everyday law enforcement. This wariness of standing armies was born of experience and a study of history… If even the earliest attempts at centralized police forces would have alarmed the founders, today’s policing would have terrified them.”

Among the most blatant offenders are paramilitary SWAT teams, whose ubiquitous presence has only increased over the years.

Approximate Number of SWAT Raids in the United States:

And though we assume SWAT deployments are used only in dire circumstances – active shooters, hostages, etc. – in fact, the opposite is true.

Weapons Found on Scene as Predicted:
35% of the time

Drug Contraband* Found on Scene as Predicted: [does not necessarily mean drugs; includes merely paraphernalia]
35% of the time

Still not convinced any of this qualifies as a “militarization?” Let’s look at the weapons stock Arizona law enforcement agencies have accumulated through the Department of Defense’s 1033 program, which supplies military-grade weaponry to state and local police forces at no cost.

From the above, then, it shouldn’t come as any surprise that Arizona is second only to Oklahoma in rate of fatal police shootings per 1 million residents in 2015, with numbers more than double most states.

The source of the problem is systemic under-reporting. SWAT teams operate largely without state or federal oversight, and no relevant statistics are immediately available to the public without a formal request (which is often denied).

For police agencies, all reports of fatal shootings by police to the FBI are voluntary.

It seems likely that until more substantial, and therefore accurate, data is unilaterally collected, such unchecked rights intrusions will continue – and perhaps escalate.

For now, recall those amendments that appear early and often in our constitution. Does anything here sound well regulated, secure, or completed with adequate consent? 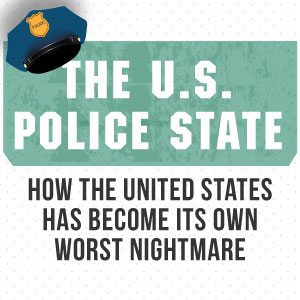