With the Ford Crown Victoria being phased out from police fleets around the country, a new era of cop cars are coming to light. For cop car enthusiasts, the Dodge Charger has brought about a change in styling that has never been seen before.

While the Dodge Charger seems to be the undisputed top cop car in the United States, the international community has a variety of police vehicles that will blow your mind. Just looking at these top ten law enforcement vehicles from around the world will want to make any person get a criminal justice degree. 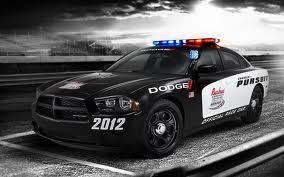 The Dodge Charger has taken the U.S. law enforcement market by storm. The 5.7 liter V8 Hemi engine that puts out 344 horsepower makes it the perfect police pursuit vehicle.

This vehicle has been tried and tested throughout the U.S. market. Its reliability and practicality have made it a widely used law enforcement vehicle and police officers have put their stamp of approval on them.

While this vehicle may not be as unique as the rest on this list, its stunning power and good looks have earned the Dodge Charger the number ten spot. 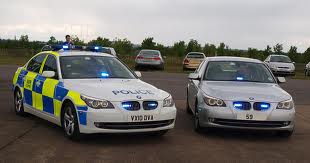 This classic German vehicle has been taken to the streets by the British Police. This specially-made BMW 530d boasts a 3 liter turbo diesel engine that can put out 245 horsepower.

This car is mainly used by the British Police as a pursuit vehicle, and rightly so. The powerful engine combined with the superb handling makes it one of the best police vehicles in use today.

While the maintenance costs make this car unsuitable for most major police forces, its stunning looks and superior performance have earned it the number nine spot on this list. 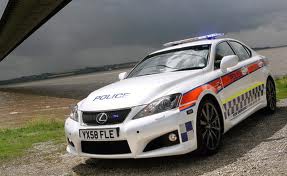 The British Police have a knack for choosing fierce-looking police vehicles, and this Lexus is no different.

The Lexus IS-F Police Edition was used by British Police between 2008 and 2010. This vehicle boasts a 5 liter, V8 engine that can produce up to 417 horsepower. It looks stylish and is equipped with just about everything a police officer needs.

Despite the high price tag that this beast carries with it, the Lexus IS-F still commands the number eight spot on this list. 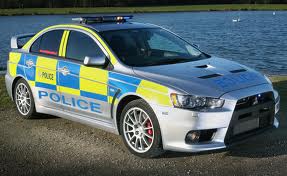 The Evolution X Police Edition comes standard with a 300 horsepower, four cylinder engine with all-wheel drive. The handling capabilities and mean looks of this British Evo make it the number seven top law enforcement vehicle on this list. 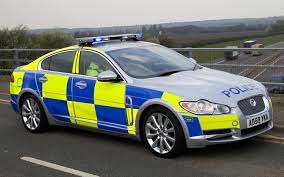 The 2008 Jaguar XF comes with a 3 liter diesel engine that puts out 270 horsepower. While the car may look cool with the green and blue checkers painted on the sides, the power and performance doesn’t compare to other law enforcement vehicles that are higher up on the list.

Still, the Jaguar has earned the number six spot on this list just because it looks cool. 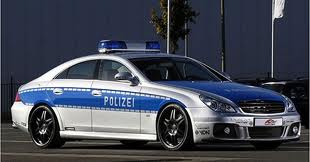 The 2006 Brabus Rocket CLS is a threat on the streets of Italy when a police officer is behind the wheel. The car is painted silver with blue stripes on the sides and was known as the world’s fastest sedan when it came off the assembly line.

The Brabus Rocket boasts a 712 horsepower, V12 engine that’s capable of speeds in excess of 200 miles-per-hour. These impressive stats have earned the Brabus Rocket the number 5 spot on this list. 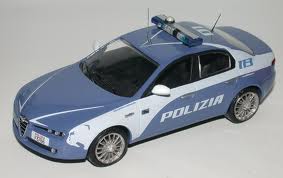 The Alfa Romeo boasts a 256 horsepower V6 engine that, combined with the great handling was perfect for inner city vehicle chases. The popping blue color combined by the stylish looks have earned this Alfa Romeo the number four spot on this list. 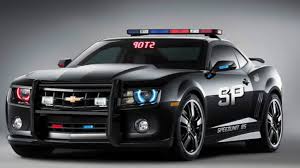 This classic law enforcement vehicle was first introduced to police officers in 1998. While it’s existence has been short-lived, the Chevrolet Camaro still earns the number three spot on this list.

The two door design of the Camaro did not make it ideal for transporting prisoners, but the 5.6 liter V8 under the hood was perfect for chasing down speed demons. You just had to wait for your partner to come and pick up the suspect.

Street racers and professionals alike are familiar with the Nissan Skyline, but no one would have expected this vehicle to be in a police force’s vehicle fleet.

The Nissan Skyline is currently being used as a pursuit vehicle in Japan. The superb handling, fast acceleration and light weight make it the perfect vehicle for catching fast cars on the highway.

The iconic status of the Nissan Skyline alone has earned it the number two spot on this list. 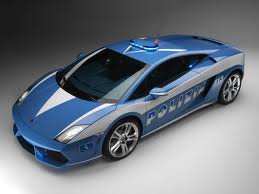 Without a doubt the top law enforcement vehicle in the world, the Lamborghini Gallardo is currently being used by Italian law enforcement. While the car may not be practical for transporting bad guys, the 5.2 liter engine can produce as much as 552 horsepower and will surely run them down! At the same time giving a thrill to whoever is behind the wheel.

The Gallardo that the Italian Police use has been outfitted with everything a police officer would ever need while on the road; including a computer, weapons holster, radio and even a defibrillator.

While the reputation of the Gallardo alone earns it a spot on the list, the special features within the vehicle have earned it the number one spot.