Homeland Security has the crucial mission of national security. The men and women who work for the department protect the nation from numerous foreign and domestic threats. More than 240,000 people work in DHS jobs, which range from border security to cybersecurity to emergency response. Although their duties differ, they share the same goal – keeping Americans safe. 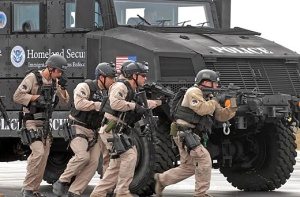 Department Creation
Eleven days after September 11, 2001, President George W. Bush created the Office of Homeland Security. He called on Ridge to oversee this White House office and coordinate a national security strategy against terrorism. In November 2002, Congress passed the Homeland Security Act, which created a stand-alone department to unify the security efforts.

Department Modifications
When Michael Chertoff took office in February 2005, he initiated a Second Stage Review (2SR) to evaluate all areas of Homeland Security. A team of public and private partners at all levels of government worked on the review, which resulted in the department’s reorganization.

Congress passed the Security Accountability for Every Port Act, or SAFE Port Act, in October 2006. It also established the Domestic Nuclear Detection Office (DNDO) and reorganized the Federal Emergency Management Agency (FEMA). Many of the FEMA changes built on post-Katrina emergency management reforms.

The 9/11 Commission Implementation Act of 2007 implemented some of the 9/11 Commission’s recommendations and created information-sharing fusion centers. In 2010, Janet Napolitano completed the Quadrennial Homeland Security Review (QHSR) and established a framework for homeland security goals.

Department Members
Congress integrated 22 federal departments and agencies to create the Department of Homeland Security. This has resulted in a more effective cabinet department. The current DHS agencies include the United States Citizenship and Immigration Services (USCIS), Customs and Border Protection (CBP), Immigration and Customs Enforcement (ICE), the Secret Service, the Coast Guard and various offices within FEMA, the Federal Bureau of Investigation (FBI) and several cabinet departments.

Department Careers
The employees of Homeland Security have a wide range of duties. They secure the national borders, airports, seaports and waterways. They research cybercrimes and develop security technologies. They respond to natural disasters and terrorist attacks. The analyze intelligence data and more.

The Homeland Security website (dhs.gov) provides career links, online forms, contact information and help desk support to anyone who has questions about this executive department. It also posts links to the agencies and departments that make up the department. Career information is available on each of these sites as well.